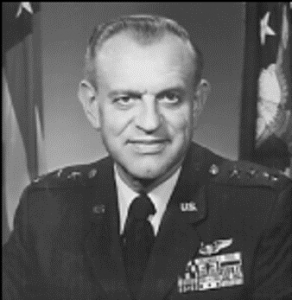 Lieutenant General Hans H. “Whitey” Driessnack was assistant vice chief of staff,
Headquarters U.S. Air Force, Washington, D.C. He also served as senior Air Force
representative, U.S. Delegation to the Military Staff! Committee, United Nations.
Gen. Driessnack started his career by serving a year in the Navy before entering
Syracuse University. Commissioned into the Air Force, he became a fighter pilot and
flight commander during the Korean War, flying 25 combat missions. He worked at the
Headquarters Systems Command at Andrews Air Force Base and worked his way up to
become comptroller of the Air Force in 1978. He was named assistant vice chief of sta! in
1981 and also served as the senior Air Force representative to the United Nations.

Although demonstrating a life-long commitment to learning and increasing responsibility
and leadership, it was in the 1970s in particular that “Whitey” Driessnack had the
opportunity to build on the seminal EVM work pioneered by A Ernest “Ernie” Fitzgerald.
Until then the use of PERT/Cost was predominant in government project control, involving
a continually revised Estimate to Complete (ETC) that was proving unreliable. “Whitey”,
initially an advocate of PERT/Cost, was introduced to an alternate concept created to
redress the unreliability of the ETC, called Earned Value. This was embodied by Fitzgerald
into the original Airforce Cost/Schedule Planning and Control Specification (CSpec).
Driessnack went on to champion this into becoming adopted by the US Department of
Defense in 1967 as the Cost/Schedule Control System Criteria (C/SCSC), the foundation
upon which Earned Value Management is based today.

After his military retirement, he worked for six years for a defense contractor, United
Technologies, and then retired a second time in 1989. Even then his commitment to his
community continued with his involvement in building an Air Force retirement community
(Falcons Landing) in the Washington DC area. He formed the Air Force retired officers
community board and served as its chairman.
He was considered a leader in project management, so much so that shortly after his second
retirement the College of Performance Management named its highest award in his honor.

Awarded to individuals who have made major contributions
to project performance management policy, concepts, and
practices, which have national and international
implications. This recognition is awarded to individuals who
have provided critical contributions to the evolution of
Earned Value Management and project planning and control
standards, research, and education, and have promoted the
exchange of theory, development, and application among
project management professionals.

Susan Wood is a Past President, Executive Vice President and Vice President for Conferences and Events for the College of Performance Management (CPM).  She served as the first President of the newly formed CPM after we came out of our agreement with PMI.  Susan also served as the PMI EVM CoP Council Manager.  She was the North American PMI-CPM liaison to the Asia Pacific 2006 Symposium.  Susan was also the Program Manager for the annual PMI-CPM International Conferences.  She has also served as Program Manager of a number of the International Integrated Program Management Conferences (IPMCs) co-sponsored by PMI-CPM, National Defense Industrial Association, and the Society of Cost Estimating and Analysis (US) and Co-Chair of the 1 to 3rd PMI-CPM EVM Japan Conferences.

Susan is a senior partner at Earned Value Associates, LLC specializing in all aspects of EVM.  Susan retired in 2004 as the EVM Focal Point for the Air Armament Center (AAC) at Eglin Air Force Base, Florida, responsible for EVM policy, guidance and implementation support across all AAC programs.  As a member of the Air Force (AF) Earned Value (EV) Integrated Product Team, Susan contributed to AF EV policy and implementation guidance.  She has led and served on contractor and government EVM System Review teams and has developed and provided EVM training to government and contractor personnel for over 30 years.  Susan has over 35 year’s government and contractor acquisition experience.

To learn more about Susan Wood, click HERE to read her biography.

Connect with Susan through:

If you have read any Earned Value literature you will recognize the recipients of this award as a
pantheon of the champions of Earned Value Management and Project Controls leadership:

Page load link
We use cookies to improve your experience and analyze website traffic to improve our website's performance. By continuing to the site, you consent to store on your device all the technologies required for this task. See our Privacy Policy for full details. Ok
Go to Top